The Best of the Bestiary: literature’s most popular mythical creatures

Lately, I’ve been craving a magical encounter. (Am I alone?)

Luckily, I have books on my shelf that can satisfy. All together,  they’re the makings of a literary menagerie, and while I’m reading, I’m at-one with the magical world and all its creatures.

But as soon as I close the book, questions pop up. Where did these creatures come from? Why are they so famous? And which one is the most famous of all?

In case you share my curiousity, I put together a list of literature’s most popular mythical creatures (as well as their origins!) 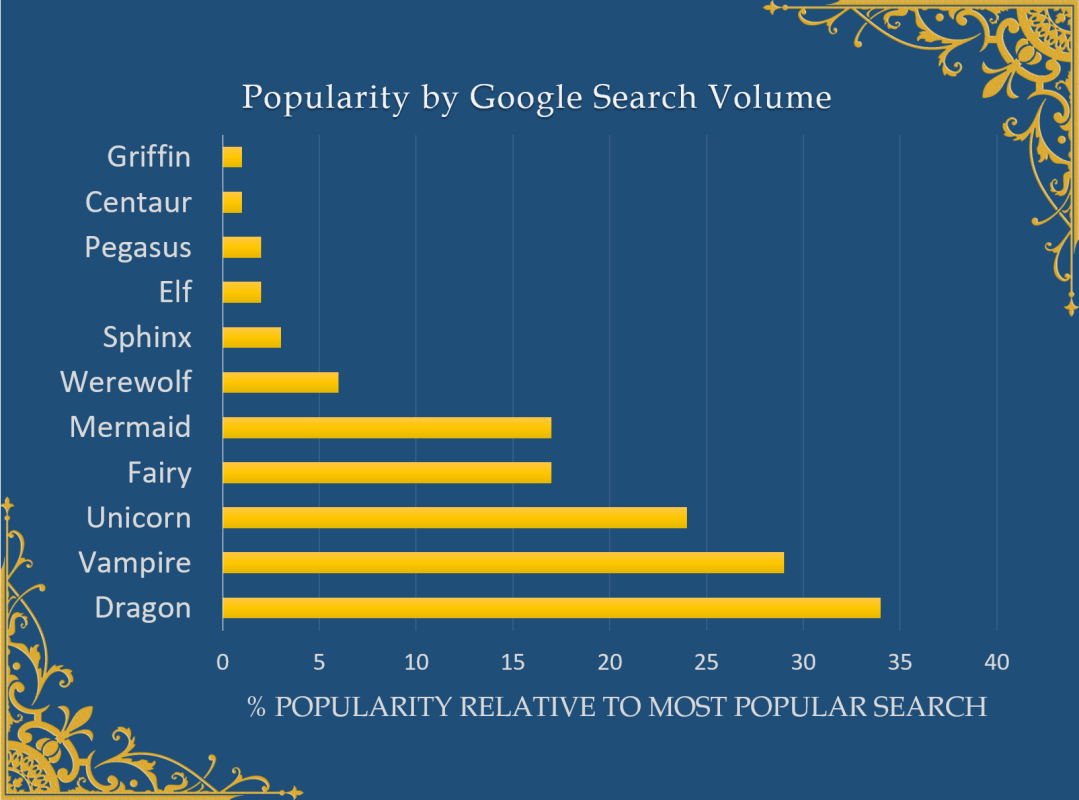 This search is a little complicated. The keywords are scored by search volume relative to the day’s most popular search. Let’s say the most popular keyword, with 1,000,000 searches, was “impeachment.” Now, let’s say that 330,000 people searched for the keyword “dragon.” That means dragon would score a 33 on this scale. (It received 33% as many searches as the keyword “impeachment.” Pros? I was able to filter the results to exclude keywords with double meanings. For example, there are lots of technologies/businesses with “dragon” in their name, but I only included searches for “dragon” as a mythical creature. Cons? Google search volume does not necessarily translate into literary interest. For example, today’s top google search is “Kellyanne Conway,” but that doesn’t mean millions of people are lining up to read a whole book about her!

This search was simpler. I just typed the keyword into the Amazon search bar and looked at the results under the “books” category. Pros? This search is specific to literary use. These creatures aren’t just popular on Google, they’re popular in books. Cons? I wasn’t able to filter out keywords that had double meanings. For example, the keyword “griffin” returned a ton of books that had nothing to do with griffins. Instead, an author or a character’s last name was Griffin.

I decided to use the Amazon book results to make my list, since they are directly tied to literature. However, I excluded a few results with double meanings (griffin, sphinx, and siren).

With 122,000 more books to its name than any other magical creature, the dragon reigns over human imagination and creativity.

Where did dragons come from? They may have been inspired by ancient people encountering dinosaur bones. Or they may be a composite of the three greatest threats that primates face in the wild: snakes, large mammals, and birds of prey. Over time, these three instinctual fears merged to form a supernatural fear. You can read the science behind that theory here!

Best portrayal of dragons? Christopher Paolini, Inheritance Cycle. After reading about Paolini’s dragons, which are telepathically bonded to their riders, I have never gotten over wanting a dragon of my own!

Humanity is so smitten with fairies, we’ve given them their own literary genre: the fairy tale.

Where did fairies come from? Almost every culture with an oral tradition about fairies describes the race being “driven underground” after humans arrived.

Victorian scholars interpreted these stories literally. They posited that “fairies” were actually a race of prehistoric people who were driven to extinction when Celtic and Germanic people arrived in Europe. The fairies’ childlike size matches up with other prehistoric races around the world, and their legendary fear of iron might be a cultural memory of how iron weapons were used to defeat a race of stone-age people.

Today, most scholars back a less literal interpretation: fairies represent ancient, pagan deities who had to be demoted after Christianity spread across Europe.

Best portrayal of fairies? JM Barrie, Peter Pan. With her delicate beauty and saucy temper, Tinkerbell stole the hearts of millions and defined the fairy image for future generations.

When vampires began cutting their teeth on romance novels, they became one of a handful of magical creatures to inspire bestsellers in two genres: horror and romance.

Where did vampires come from? During the medieval period, villagers who believed they were being cursed of haunted by the recent dead began digging up graves. What they found behind the coffin’s lid was worse than anything they could have imagined. Corpses were bloated and discolored. Dark liquid seeped from their noses and mouths, and their hair, fingernails, and teeth seemed to have grown since they were buried.

Today, we know that these are all signs of natural decomposition, but to a terrified medieval peasant, there could be only one conclusion: the corpse was rising from its grave to feed on living blood–and it was growing stronger with each meal!

Best portrayal of vampires? Bram Stoker, Dracula. Stoker was the first to put his vampires in a suit and tie, transforming these grotesque monsters into complex and glamorous characters. Vampire lore has never been the same–nor has any other writer created a vampire quite like Dracula.

Trailing behind the vampire is his rival: the werewolf. True, vampires have twice as many books written about them–but werewolves still have a loyal pack of fans!

Where did werewolves come from? Shapeshifters are almost as old as civilization itself. They are generally put down as parables, designed to teach children their morals. (In this case, going against the grain of society–through solitary habits, sexual deviance, mental illness, etc–means you are no better than an animal).

But why the wolf fetish?

Werewolf lore is strongest in Europe, where wolves were the most dangerous predator that most humans encountered. The legend might also have been fueled by animal cults, like the Norse beserkers, who wore wolf and bear skins into battle.

They may not be the heroes or villains of many books, but unicorns are still the darling of the fantasy genre.

Where did unicorns come from? Unicorns were first described by Ctesias, a Greek doctor who traveled through Persia, collecting stories from Persian and Indian people. He described unicorns as “wild asses the size of horses,” with white bodies, red heads, blue eyes, and a single tri-colored horn. According to Ctesias, unicorns were faster than any other animal and could put up a terrible fight if cornered. He also noted that their meat was bitter, and they were only hunted for their horns.

Today, scholars believe that the “unicorn” was a composite of several animals which were described to Ctesias. The Indian rhinocerous is probably the largest influence, while antelopes or deer could account for the unicorn’s grace. Best portrayal of unicorns? TH White, The Once and Future King. White draws you into the classic scene of maiden-baiting a unicorn. He captures not only the grace and innocence of the unicorn but the nastiness of anyone who would want to kill it!

Long before Ariel became part of our world, mermaids made a splash in folktales and romantic poetry.

Where did mermaids come from? Ancient people created gods (or goddesses) for just about everything, and the great blue sea was no exception. Assyrians worshiped Atargatis, an oceanic fertility goddess who was half-woman, half-fish. Later, the Greeks worshiped Poseidon (Roman: Neptune), an oceanic god who was sometimes seen with a fish tail.

But while the Greeks “worshiped” Poseidon, they really got excited about his daughters: the ocean nymphs. Any male, mortal or otherwise, who caught sight of one of these demi-goddesses fell in love with her. Unfortunately, these love affairs often resulted in nymphs being transformed into monsters, courtesy of a jealous goddess, so the nymphs got a bit of a dangerous reputation.

Eventually, monotheism quashed the likes of Atargatis and Poseidon–but the less deified nymphs managed to stick around and mingle with European water-creatures to give us the mermaids we know today.

Early science backed up the mermaid legend with claims that all land animals had an ocean counterpart (see seahorses and seacows), and cartographers jumped on board as well, doodling mermaids along the coastlines with the header “here be monsters.”

Best portrayal of mermaids? Hans Christian Anderson, The Little Mermaid. Not only does Anderson’s story give a heart-stirring example of unrequited love, it begins with an enchanting description of the mermaid’s kingdom under the sea.

7 “Romantic” Book Characters Who Are Actually Just Creepy   OR

What Makes a Book Scary?

One thought on “The Best of the Bestiary: literature’s most popular mythical creatures”